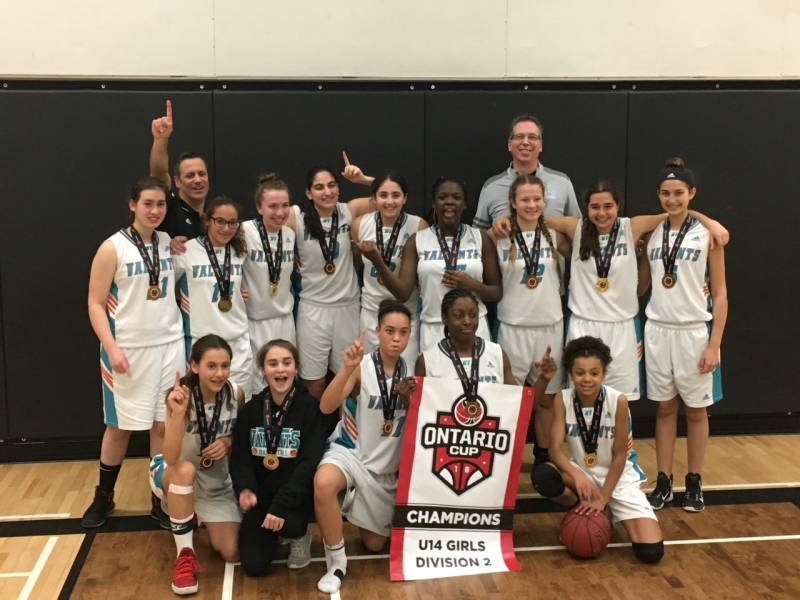 On the shoulders of Alisha Murray, captain and tournament MVP, the Major Bantam girls (U14) went a perfect 4-0 in tournament play to capture a gold medal. Pre-tournament seedlings ranked the girls 8th, meaning they had to climb from the bottom to the top to claim supremacy.

The 1st game versus Durham City Basketball Association proved to be the toughest, a previous 40-29 loss to them in OBLX played on the girls psyche. Victory was ultimately decided by the smooth shooting of Guiliana Biasutto who scored 8 of her 10 points from the outside in the second half, against a very stubborn DCBA zone defence. Windsor 44 DCBA 42.

The next three victories tilted the Valiants way behind a tenacious team defence lead by Tsarah Langlois, Autumn Allen and Leah Tate. Valiants outscored the opposition 159-119 over the span with all 13 players not only seeing the court but registering on the score sheet as well. Defeating St. Catharines 56-35 & Guelph 65-52.

The gold medal game was a tension filled defensive battle, offensive spurts from both teams created great drama. The final moments of the game were controlled by the Valiants with disciplined ball control and satisfactory foul shooting. Valiants 38- Mississauga 32, Windsor wins gold medal !

Alisha Murray lead all scorers with 64 points, 10 assists, 40 rebounds, 19 steals and 16 blocked shots.
This team was anchored by an experienced roster that included Mia Younan, Mia Dosant, Zainalb Aboukamil, Emma Pillon, Kamina Jing, Mariam Habib. The team picked up new players Emily Agasse and Alessia Bozzi who all improved tremendously over the course of the season.

The team began their season in November with a disciplined 3 days a week schedule and 35 game season. They participated in the Ontario Basketball League elite division, travelling to the Greater Toronto Area 5 times over the winter and posting a 4-9 record. Three area tournaments rewarded them with 2 golds and a silver.

Head Coach Chuck Robson and assistant Rob Biasutto conveyed all that is right with youth sport as they displayed an even temperament and positive coaching to guide this team to a gold medal, it’s second in 4 years, to go along with a silver and bronze during a 4 yr. run together.

The team’s overall success can be attributed to the commitment and trust of players, parents and coaching staff.