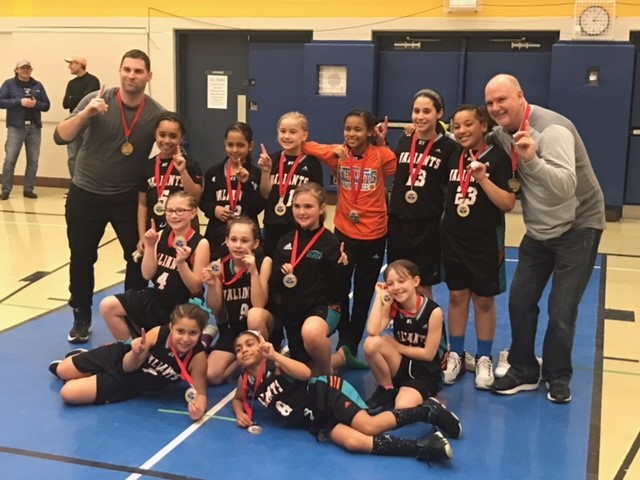 The U10 Novice Valiants Squad went undefeated on their quest for the Championship!!!!

The tournament hosted by the London Ramblers on the weekend of February 16th-18th was the third successful tournament for these ladies.

The first game pitted the Valiants against a smaller yet ambitious team from Brantford CYO. Although the score may say otherwise there was no quit in Brantford. The Valiants took the win in a 37-0 decision.
On the first of two games Saturday the Valiants played the Guelph Gryphons. What started out as a back and forth battle, eventually seen the Valiants settle down and prove too much for a savvy Guelph team. The Valiants came out on top with a 42-23 win.

Saturday’s second game proved to be the biggest test of the weekend for our young Valiants. The winner of this one would go on to the championship game. They played the KW Vipers in front of a spirited crowd of family and friends. This was an evenly fought battle with every possession heavily contested. As time ran down we again see our Valiants finish strong with a 24-20 win. This put the Valiants at 3-0 and ready for Championship Sunday.

After a good night’s rest the Valiants were prepared to battle hard for a win. They faced the Huron Lakers who proved a worthy adversary. The first half was evenly matched with the Valiants up 11-9 at halftime. With Time to refocus and make adjustments the Valiants came out and increased their lead in shifts 5 thru 8. The Valiants clinched the championship with a 34-21 win!!

Congratulations to the U10 Novice Valiants Team on an exciting weekend of basketball. Thank you to the London Ramblers Basketball Association for hosting a great tournament.

Both Coach Dan and Coach Jason have worked hard with the ladies, and are very proud of the teamwork they showed in winning this championship.

Thank you to all the parents, family and friends for your continued support and passionate cheering throughout the season.
Keep up the good work ladies!!